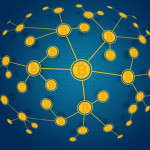 In the blockchain world, consensus comes from distributed ledger technology.  Distributed ledger works because every node on a network has a copy of the entire blockchain transaction history. There are no secrets. Every node checks the work of the other nodes, so one node’s attempt to provide invalid information gets rejected by the remaining nodes. If one node is destroyed, the rest soldier on, confident in the transparency of the system. The integrity of distributed ledger models have inspired enough consensus to amass more than four billion dollars in Bitcoin market capitalization since its invention in 2009. This figure does not include the billions of dollars in venture capital poured into other digital currency and scaled blockchain applications.

The size of the digital currency market shows not only consensus on the integrity of blockchain technology, but also a more telling consensus: one of the failure of current currency models to meet the needs of humans and businesses in modern commerce.  This should be interesting.